In the early 1990s, Dan Miller was a young accountant from Harrisburg who was fired for being gay. His story made national headlines, including in the New Yorker.

In 1994, Dan testified before a US Congressional committee on his experience with anti-gay discrimination in Cumberland County. His testimony is below.

Until a comprehensive LGBT-inclusive nondiscrimination law is enacted in Pennsylvania, our state statute on discrimination does not prevent his experience from 1990 from repeating itself. While in 2019 the Pennsylvania Human Relations Commission may take statistical information, unlike in the 1990s, they still have no statute explicitly allowing them to take cases related to sexual orientation or gender identity.

Anti-LGBT discrimination has been occurring in Pennsylvania for generations. Pennsylvania Values recognizes that this issue has been ongoing for a long time, and Pennsylvanians have suffered for too long without these critical protections. 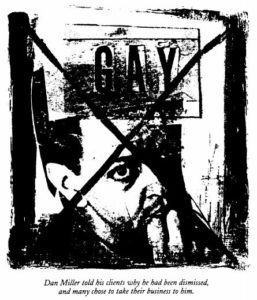 “Mr. MILLER. My name is Dan Miller. I am a Certified Public Accountant living in Harrisburg, Pennsylvania. I operate my own CPA firm. I am an employer, homeowner, landlord, and church member. I derive much enjoyment from close family relationships with my parents, siblings, and my personal partner, Carl, and his two young children.

In most respects I am a typical middle-class American. Unlike most Americans, I am a victim of blatant discrimination and the experience has radically changed my life.

Prior to owning my own CPA firm, I was employed by Donald L. DeMuth Professional Management Consultants. It was Mr. Donald DeMuth’s firm that irrationally discriminated against me on the basis of my sexual orientation. . . .

My story begins late in the summer of 1990. Several incidents of anti-gay violence occurred in Harrisburg and I was one of several community leaders informing city council and requesting action. Eventually, I appeared on several local TV news programs asking for increased police protection for gay and lesbian residents.

On Wednesday, October 17, 1990, at 10 a.m., my boss, Donald L. DeMuth, called me into his office. I was fired effective immediately. I sat in his office in stunned silence. “You are fired” kept ringing over and over in my mind. I was devastated. DeMuth continued: I would receive no severance pay or vacation pay, no benefits. Nothing.

And then he went for the final and most severe blow, asking, “What do you want me to tell our clients?” He assumed that I was humiliated and embarrassed at being gay. Apparently DeMuth expected me to leave his firm and hang my head in shame.

I was enraged. I told him, “Tell them the truth: Tell them you fired me because I’m gay.” In front of the entire office staff, I cleaned out my desk and left the office of DeMuth Professional Management Consultants for the last time.

At home I didn’t know what to do next. I didn’t know how being fired would affect future job prospects. My life was in turmoil. How was I going to pay my bills, my mortgage, my taxes? I signed up for unemployment compensation, but DeMuth contested benefit payment. He claimed firing me for homosexuality was just cause. I was forced to return to the unemployment office for several additional interviews before benefits were approved. It was humiliating.

At home, I became depressed. I couldn’t eat and I just barely slept. My life was collapsing and it had all happened because I am gay and not willing to deny it.

In fact, I had never publicly acknowledged that I was gay. I had only exercised my freedom of speech and spoke in support of increased protection from anti-gay violence. Speaking on this issue cost me my job. My boss automatically assumed I was gay and fired me without even knowing the facts.

The following trial testimony displays the pure bigotry espoused by Donald DeMuth when questions by my attorney Daniel Sullivan.

DeMuth responds: “I consider homosexuality as cause that incapacitated him from properly discharging his duties.”

“Was he properly discharging his duties with respect to his services as a professional financial consultant as of October 17, 1990?”

DeMuth: “Not if he is a homosexual.”

I then went to the Pennsylvania Human Relations Commission. I was even more disappointed. The law didn’t include the term “sexual orientation” and there was nothing they could do. They even refused to record my case for use as a statistical reference. I was forced to accept the fact that with no legal protection, I had to move on as best I could.

Six weeks passed and on December 1, 1990, I opened my own CPA office in downtown Harrisburg. Approximately one-third of DeMuth’s former clients engaged me as their accountant. Although the future looked promising, my troubles with DeMuth were not over. In some ways they were just beginning.

At the end of my first tax season, I began receiving letters from DeMuth and his attorney demanding compensation for his former clients that had hired me. It wasn’t enough that he fired me solely for being gay. Now he wanted to be compensated for his costly business decision.

DeMuth based this claim on a contract I was required to sign six months after I began working with him. The contract in effect punished me for being gay. It stated that if I was fired for just cause and I opened a competing CPA firm, I was required to pay DeMuth for former clients that retained my services. It further defined homosexuality as just cause.

Appalled at this clause, I sought legal advice. Believing that the contract was illegal and unenforceable, I signed the contract.

One year after opening my firm, in November 1991, DeMuth filed suit against me for $124,000. He claimed that I had breached our contract and sought to have the courts enforce his personal prejudice. In June 1993, our case was heard before a jury in Cumberland County presided by Judge Kevin Hess.

Lacking a specific law prohibiting employment discrimination on the basis of sexual orientation, Judge Hess refused to let us argue that the firing was unconstitutional or against public policy, and subsequently the jury awarded DeMuth a total judgment plus interest of $130,000. The entire experience has cost me a considerable amount of emotional turmoil and just under $200,000 in judgment, interest, appeal costs and attorney’s fees.

Later, juror Mary Warner wrote in the Harrisburg Patriot News, “DeMuth took the witness stand, thrust out his jaw and said unapologetically that he had fired a good employee for being gay.” She goes on to say, “It was outrageous to hear intolerance like that in a court of law where people come to seek protection from intolerance. But the law was silent.”

In a separate editorial, the paper wrote, “Until the civil rights of all Americans, homosexual and heterosexual, are given equal authority under the law, discrimination shall infect the Land of the Free.” . . .

I ask you, as leaders of this country, to stop this injustice. You have the power to help stop anti-gay discrimination by passing civil rights legislation. Unless such legislation is passed, anti-gay employment discrimination will continue to occur in America and the law will be silent…”

Dan Miller went on to become a Harrisburg City Councilmember, and is current the Harrisburg Treasurer. He lives in the city with husband, where he raised his family.