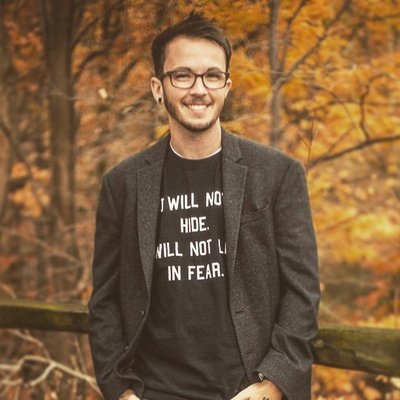 I was 16 years old when suicide became my focal point. I wanted so badly for the pain to stop. I knew things in my body were not aligning the way society was telling me it was supposed to and I feared what this meant. I thought the only solution was to end my own life. This way my family, my friends, and myself wouldn’t be exposed to the shame from the outside world that I just knew was going to come.

I was 30 years old when I had enough. I was either going to accept myself or end myself. That was it. Those were my two options. So yes, it was a choice, but not a choice in the sense of being transgender or not being transgender – that wasn’t choice. My choice was do I live or do I die? It was life or death. I am not performing for you now. I am not making a theatrical presence. I am telling you the gut wrenching depths of this truth.

All I have ever wanted was internal peace. Isn’t that really all we ever really want? To exist in a space in which we can confidently say we are proud of who we are and at peace with the journey we have traveled.

My life experiences created a path for me. A daunting, terrifying, yet beautiful and full-of-possibility path. Once I accepted that I was not broken I set out to educate and create community for those who knew exactly what darkness felt like as they lived in it every day. I wanted to send a message to those people who were force-fed fallacies about themselves. I wanted them to know they are not intrinsically flawed. I wanted create change and compassion. I wanted to be a part of movement that fostered inclusion and understanding rather than formation and perpetuation of fear and ignorance.

I went to Mercyhurst College and graduated with my bachelor in Marriage and Family Studies. I went on to get my master’s at Edinboro University in Community Counseling and then pursued my goal of becoming a professional counselor licensed by the state of Pennsylvania.

I buried myself in research, the scientific, evidence-based factual information so I could understand what in the hell was happening to me and those who are like me. Here is what I found in regards to the LGBTQ+

These are the facts.

The other facts are this – shame, rejection, discrimination, conversation therapy, and abandonment do not cause orientation or gender to shift to a cisgender, heterosexual base. What shame, rejection, discrimination, conversion therapy will cause isolation, depression, anxiety, suicidal ideation and completion. These tactics will end the lives of children who barely had the chance to gain their footing.

I work with families now. I am there with them when they are entrenched within the struggle of coming to terms with the world they live in.

I work with children who identify as LGBTQ+, specifically those who identify as transgender. When they come into my office they are wanting to be heard, accepted, respected, and valued. That is what I offer – a safe space.

And then I challenge them. I fill them in on the reality of what they will experience when they come out. I let them know that people are going to reject them. I let them know that family members will cast them out and friends will abandon them. I tell them how communities will show up to protest your basic rights and that simple everyday tasks, like using the bathroom, will become a fight.

I am not here to shame anyone. I will not engage in degradation as I believe in respecting those differ from me. I subscribe to a morality that will not be reduced by another person’s misconception, anger, or fear. However, I would be remiss if I did not verbalize how truly disappointed I am that any adult would use something as sacred as religion to shame a child.

It is so very disappointing that any adult can find value or meaning in making any child believe they are worth anything less than unconditional positive regard.

Now to address the group I am most concerned about –

The young people whose souls are too beautiful to be contained by anatomy: don’t let them shake your shine. Don’t let the voice of a few grow louder than the masses who are awake and aware. There is so much love in this world. I am pleading with you, don’t succumb. This world needs you. All the memories you have left to make need you. Trust me – it truly does get better and life is worth it.

I came with a mission. I want to open minds and connect to hearts. I want to show what is possible when fear is replaced with understanding. I am writing to you on behalf of the young people who are being condemned and shamed by the adults who should be surrounding them with love and support. I am writing to you to bear witness to what happens when a child is made to believe that they are broken and then to remind those children that I see them, the world outside of the few scared voices sees them. We believe in you. We are cheering for you. We are not just standing beside you, but we are in front and behind you.

This is why we need a statewide LGBTQ-inclusive nondiscrimination law. To ensure that all of us can live with dignity.

With compassion, our communities and commonwealth will be a better place not only for LGBTQ+ people, but for us all.