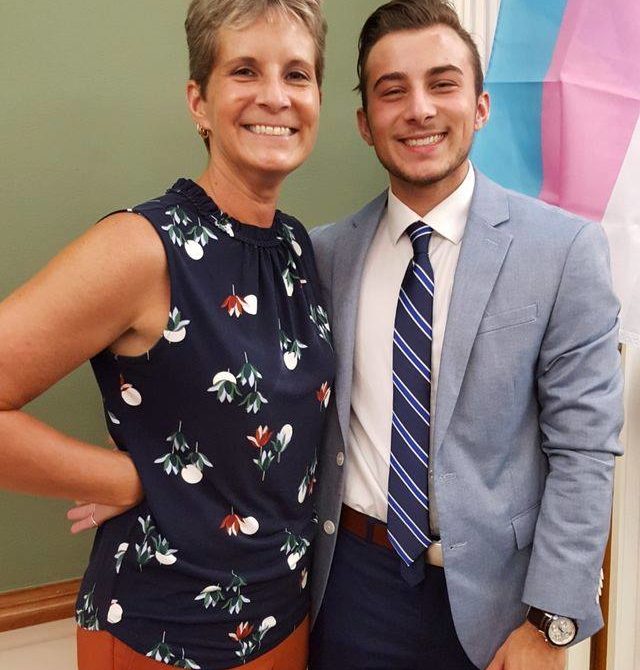 I had hoped that my son would wait until after high school to come out as transgender. But I realized I’d prefer a thriving son over a dead daughter.

When I gave birth to my first baby, the doctor said, “It’s a girl!” Before I even knew my child, those words helped me imagine the future.

But the future was different from what I expected.

By the time my child was in high school, he went by a boy’s name, ran on the boys’ cross-country team, received hormone therapy, underwent chest surgery and used the boys’ bathrooms and locker rooms.

It was clear early on that Aidan was different. From about the age of 2, Aidan didn’t want long ponytails but short hair. He wanted to wear shorts and track pants — going shopping meant the boys’ section. He was super athletic. Aidan looked like a boy.

I thought I was raising a tomboy. I wondered whether someday my daughter would come out as a lesbian. Then, in junior high, Aidan told me, “Mom, I was born in the wrong body. I’m transgender.”

I was floored. When your child comes to you and says, “The most basic things you think you know about me are false” — it takes your breath away.

I Googled my mind into oblivion. I read about families that kicked children out of the house and disowned them. I read about schools that refused to use a child’s chosen name and preferred pronouns. I learned that transgender kids have a sky-high suicide rate. I was terrified. I realized that my choice might be a dead daughter or a thriving son.

Living your truth is hard — but right.

I had hoped Aidan would wait until after high school to come out publicly as transgender, but after 10th grade, he told me he was going to do it on Facebook. I couldn’t stop him, and so I posted my own letter alongside his video — and people were supportive. Afterward, Aidan seemed lighter and happier.

Even so, it was not an easy path. Our family used to go to church together, and we’d jam to Christian music in the car — until one church associate told Aidan he was damned to hell. Aidan was devastated, and eventually quit the youth group. These days, he questions the existence of God. I still go to that church and feel so sad and angry that representatives of an institution I value denied my child’s sense of himself — I didn’t want that to happen in other places.

So I felt grateful for the support from Boyertown Area High School in Boyertown, Pennsylvania. By 10th grade, when Aidan started there, he had been consistently dressing in boys’ clothes for years. He told the guidance counselor he had gotten strange looks using the girls’ bathroom and needed an alternative. She offered the nurse’s bathroom.

That summer, Aidan started taking testosterone. When he returned to school in the fall, we filed for a name change so he would officially be “Aidan.” Then he had chest surgery. In Aidan’s senior year, he joined the boys’ cross-country team and, with the school’s permission, began using the boys’ restroom and locker rooms.

Finally, he felt fully validated for who he is. Aidan was coming into his own as a happy-go-lucky, popular and confident trans kid. Everyone who met him seemed to like him — he was even elected to the Homecoming Court. My fear began to fade.

But during Aidan’s senior year, a handful of other students sued the school, claiming that their privacy was violated because transgender students were using the same bathrooms and locker rooms. Adolescence can be an awkward time for anyone, but the high school has private changing areas and bathrooms so no student has to change in front of others.

I’m grateful that two courts have recognized the right of transgender students like Aidan to use the bathrooms and locker rooms that match their gender identity. But now the other students have asked the Supreme Court to review the case. We are working with the American Civil Liberties Union to discourage the Supreme Court from taking up the case.

It might seem like this is just about a bathroom — but in fact it’s a powerful institution saying to a child, you have no right to be who you say you are. Schools form the center of kids’ social lives, and they are where kids develop a sense of themselves. Had the school excluded Aidan from the same facilities as other boys, it would have negated, instead of affirmed, his new and shining confidence and ease in the world.

He knows transgender kids who have had more experiences like that: They have been rejected by family, friends, institutions. Several have attempted suicide.

I consider myself a very lucky mom. God blessed me with two wonderful kids. My greatest hope is that the world recognizes my son, and other transgender people like him, and allows them to find their paths.